Coffee originated in the Arab world. Coffeehouses and coffee culture flourished in the Middle East, and gained wide popularity after getting rooted in the Europe of the 17th century. As the only reinvigorating drink at that time, together with its special aroma, coffee was soon embraced by scientists, businessmen, lawyers and thinkers. With coffeehouses featured different themes gaining popularity in Hong Kong, speciality coffee has also been mushrooming. In light of this, the Warden Team and Resident Unions co-organised a coffee workshop on 25 March 2014. Mr. Tsuyoshi Mok, the mentor of the champion of the World Siphonist Competition this year, was invited to be the instructor to enrich the participants with both coffee knowledge and brewing techniques.

In the coffee workshop, our instructor prepared two types of coffee beans with distinctive characteristics: Ethiopian Yirgacheffe from Africa and Colombian Agustinos from Southern America. The former diffuses jasmine-like aroma, while the latter tastes like the sweetness of black chocolate. Our participants were as international as the coffee beans we had. Apart from local students, there were exchange students from the Mainland, Japan, Denmark and Austria. And our resident tutor, Mr. Fung Hin-fung, served as their simultaneous interpreter. Students were fascinated by the unique aroma and taste. Both wardens, Victor and Eva, commented that the speciality coffee was so different from what they daily drank. After the instructor’s demonstration, students began to brew coffee and shared their try-outs with one another. Enjoying pleasant stimuli on their taste buds, students commented on each other’s brewed coffee. Approaching the end of the workshop, students, who had not learnt about speciality coffee before, worked as if they were professional baristas. They tried different combinations of the two coffee beans provided to explore their favourite proportion.

With the intense coffee flavour left on each taste bud, students continued to share on their first encounter with coffee brewing. It was like the coffeehouses in the 18th century where the European literati converged to exchange sophisticated ideas. The workshop came to an end, and the Chan Chun Ha Hall was diffused with enchanting coffee aroma. 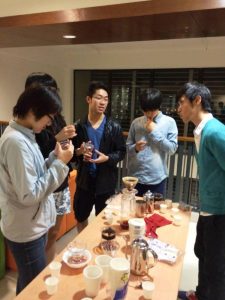 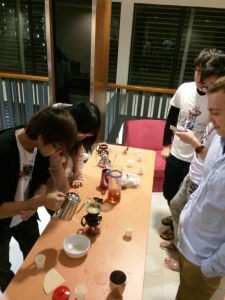 Other Posts in This Issue
When Rhododendrons Blossomed
Dr. Rebecca Lee—An Artist Travelling Around the World
Caring Doctors in Stand TALL Project
Archives
2020 2019 2018 2017 2016 2015 2014 >
Sign up now to receive our newsletter