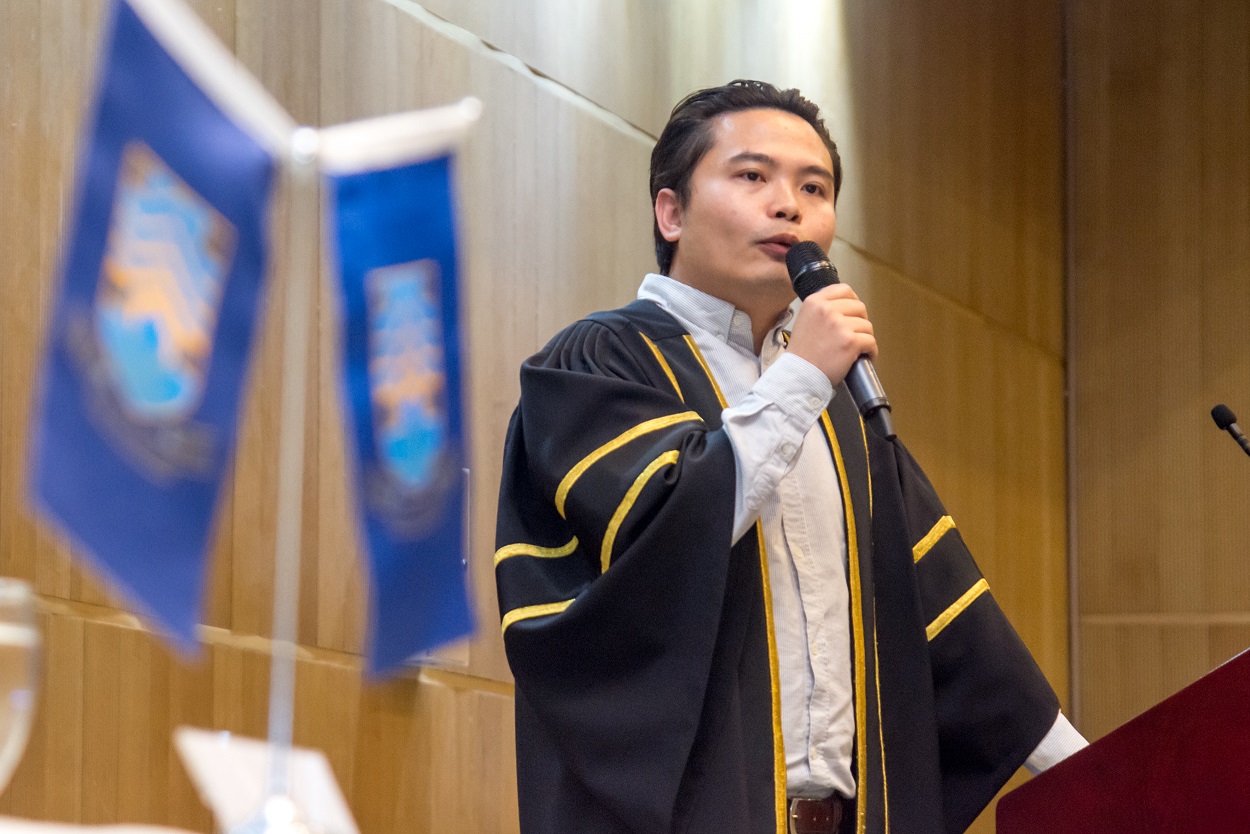 Mr. Au says that looking for a direction is a process.

“In English, we call the person who directs the making of a film ‘a director’. For a director, what matters most is to look for a direction,” said Mr. Au. Whenever a film is going to be shot, the director will be asked what he or she is planning to do and how he or she is going to do it. Mr Au honestly shared that he usually has no idea at the beginning and is not sure about what he wants since he has not yet found any direction. However, he recalled his past about the search of the future road. He considered the search a growing stage.

Mr. Au said he was not the most outstanding student and seldom won any award as a student. He hoped to make a good film, however, and would try his best to solve any problems in spite of the obstacles. “When I graduated from the Hong Kong Academy for Performing Arts, the SARS epidemic broke out. It was hard to find a job. No one was willing to shoot a film.” Luckily, when he was still studying for directing, he went to the Hong Kong Jockey Club for placement. The savings he made during placement guaranteed that he could continue his dream after graduation. While he worked hard to produce his works, he also kept an eye on any opportunity for competition. In 2007, he participated in the 2nd Fresh Wave Short Film Competition. His production Merry X’mas was awarded the Fresh Wave Fresh Wave Award and the Fresh Wave Best Film Award (Open Division).

Movie life is not all plain sailing. Sometimes, one can bump against the wall everywhere. “Trivisa is a five-year movie plan. In the first year, I was not sure if it would be kicked off successfully. I could only keep writing my screenplay. This five-year plan only promised salary for one year. At some point, there was not much left in my bank savings.” When there is a will, however, there is a way. Mr. Au found a filming job at the four largest accounting firms and became a tutor at a learning centre. The living expenses he needed when directing Trivisa were thus covered. The social experiences he gained in the jobs also provided him inspiration for creation.

“I tutored a primary school student in Chinese. To help the student revise, I needed to dictate in Putonghua but I lacked the confidence to do so. When I first wrote screenplays, I attempted at Cantonese movies. When I wrote the screenplay of Don’t Go Breaking My Heart, however, one of the characters was set to speak Mandarin. I then lost my confidence in writing. I could not judge if my dialogues were idiomatic or not.” He then thought of his secondary school which used English as the medium of instruction. In his first year, he could hear the school broadcast but had no idea what was happening around. He felt extremely alienated. In deep reflection, he found that half of his life was perplexed by language. He realised that language also permeated layer upon layer in our daily life. He transformed his experiences into his screenplay of Ten Years: Dialect.

In the end, Mr. Au sent encouraging messages to College students. “In this generation, we have a lot of roads to choose. We can think about which suits us best and which one is the road we want to take. If there is no road ahead, do not worry. If you are willing to keep going, you will walk your own path finally.”

During the High Table Dinner, Prof. Wong Wing Shing, College Master, presented a mounted calligraphy scroll to the representatives of the S.H. Ho College Student Union Executive Council. It is an inscription of the cabinet name of the Executive Council in Chinese written by Prof. Li Gangtian, a renowned calligrapher. Prof. Wong also announced the official closing of the Master Cup and presented the trophy to the winner, Ho Tim Hall. 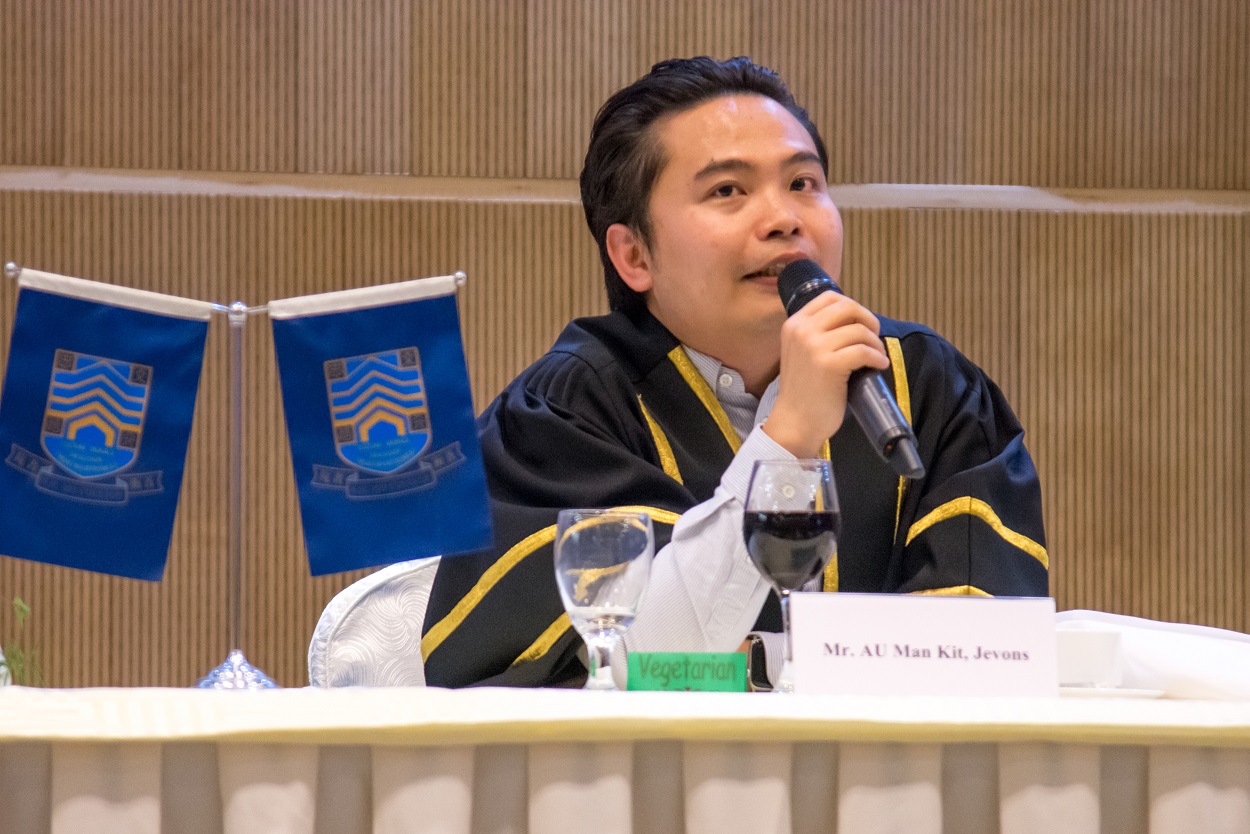 Mr. Au transforms his daily experiences into his films. 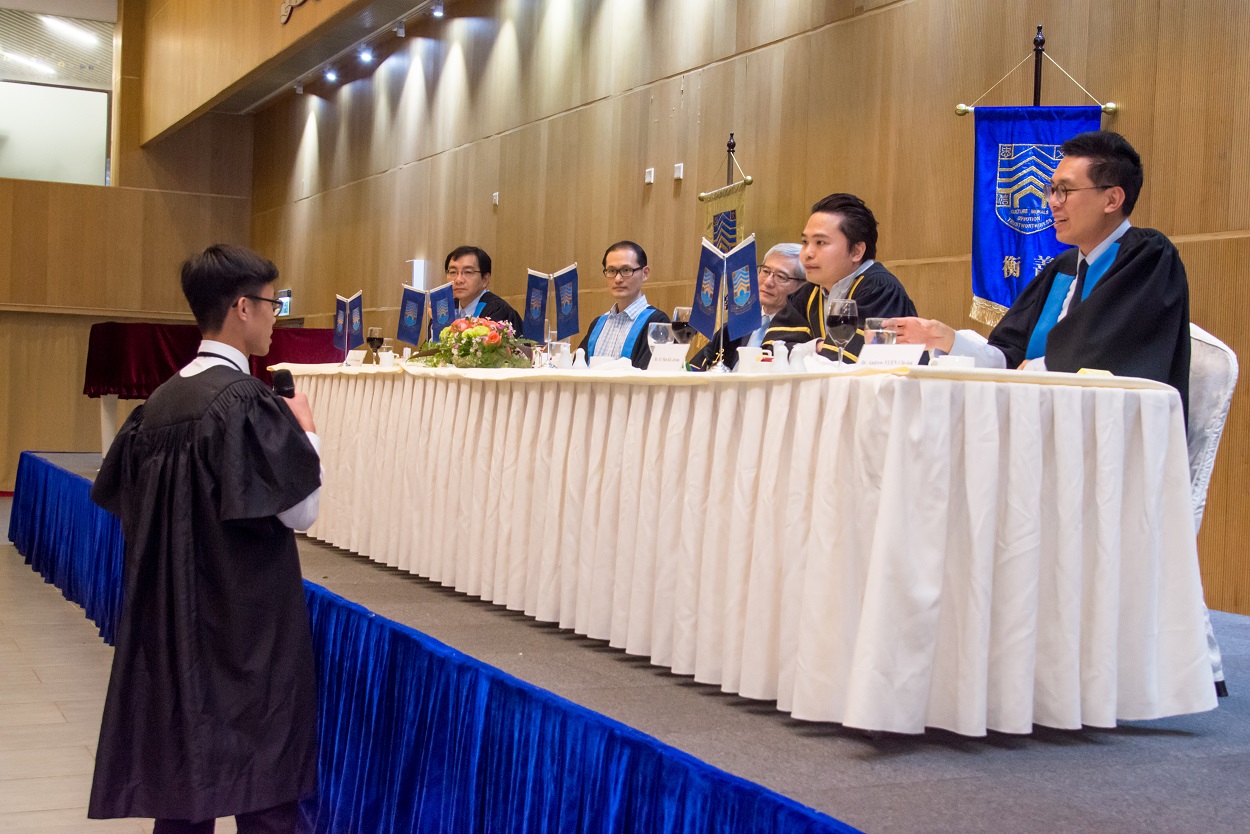 A student asks Mr. Au how he brainstorms ideas for films. 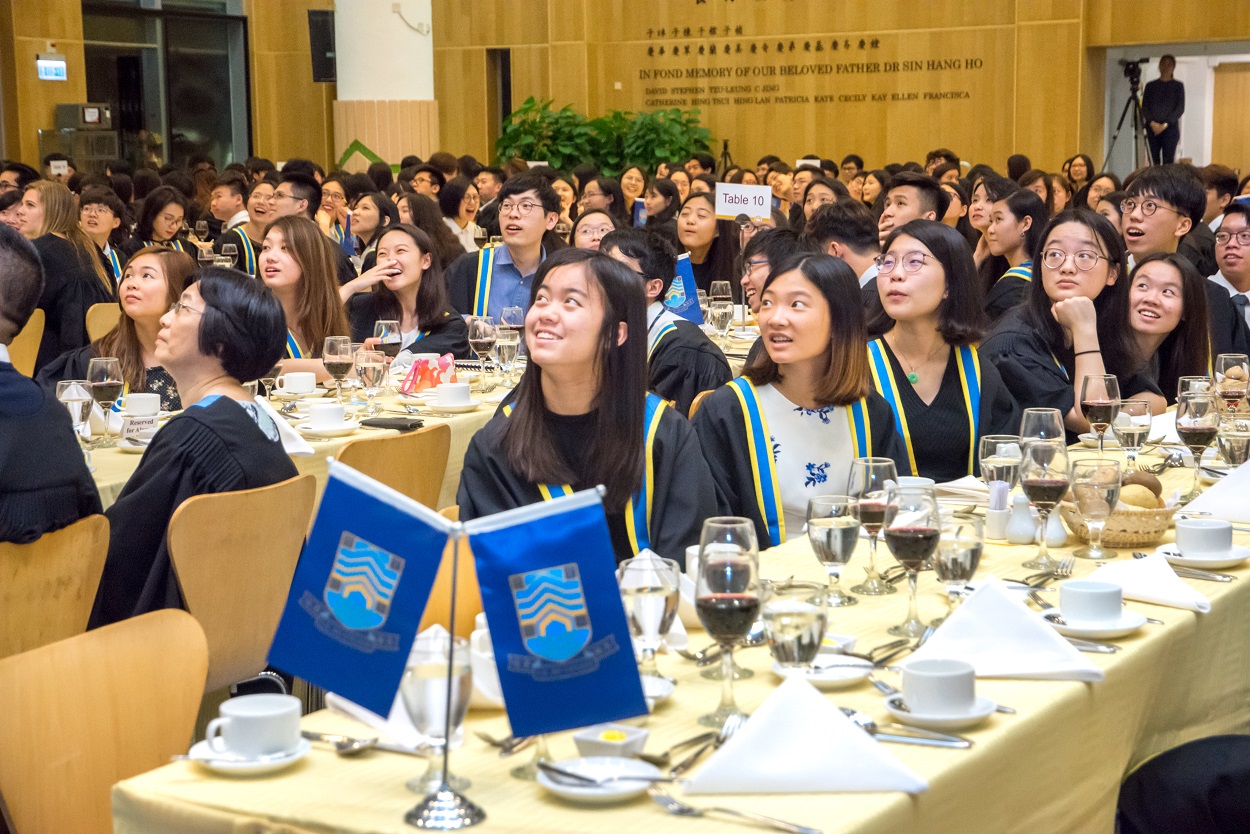 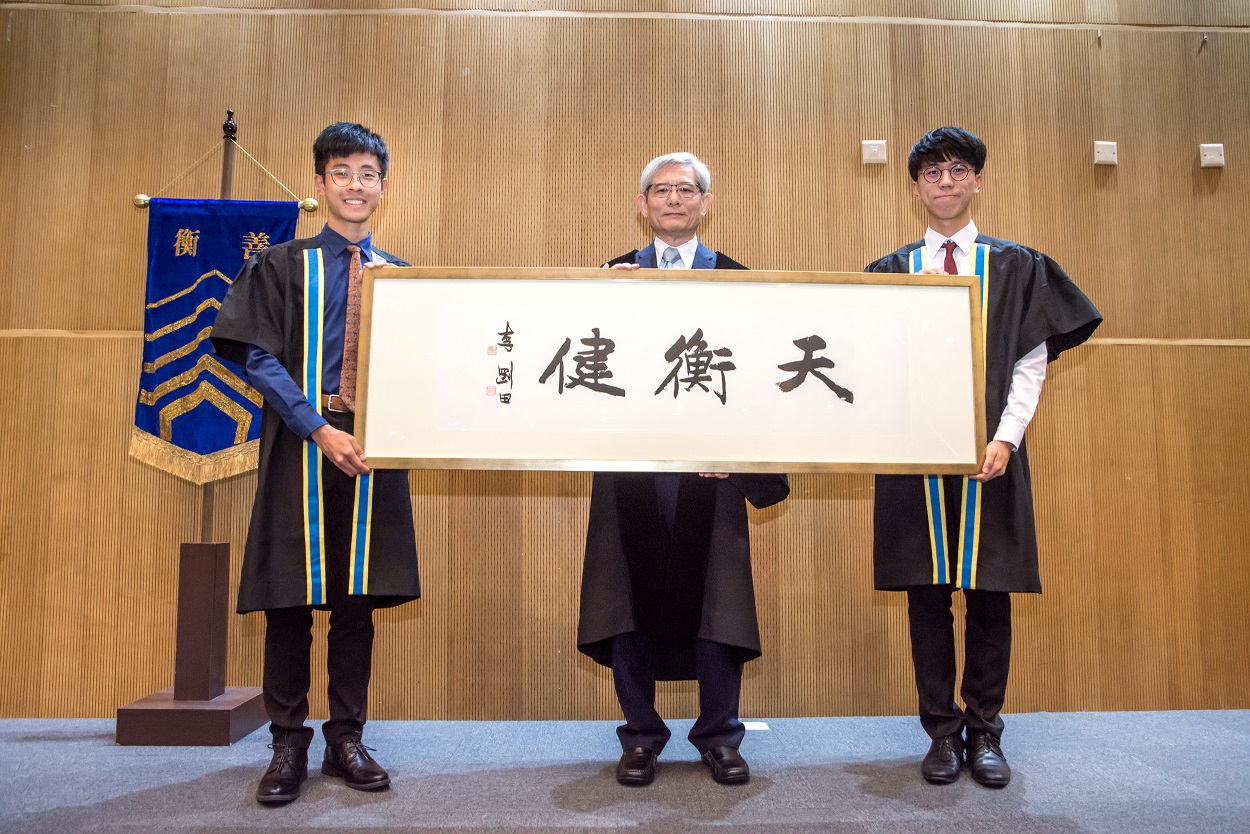 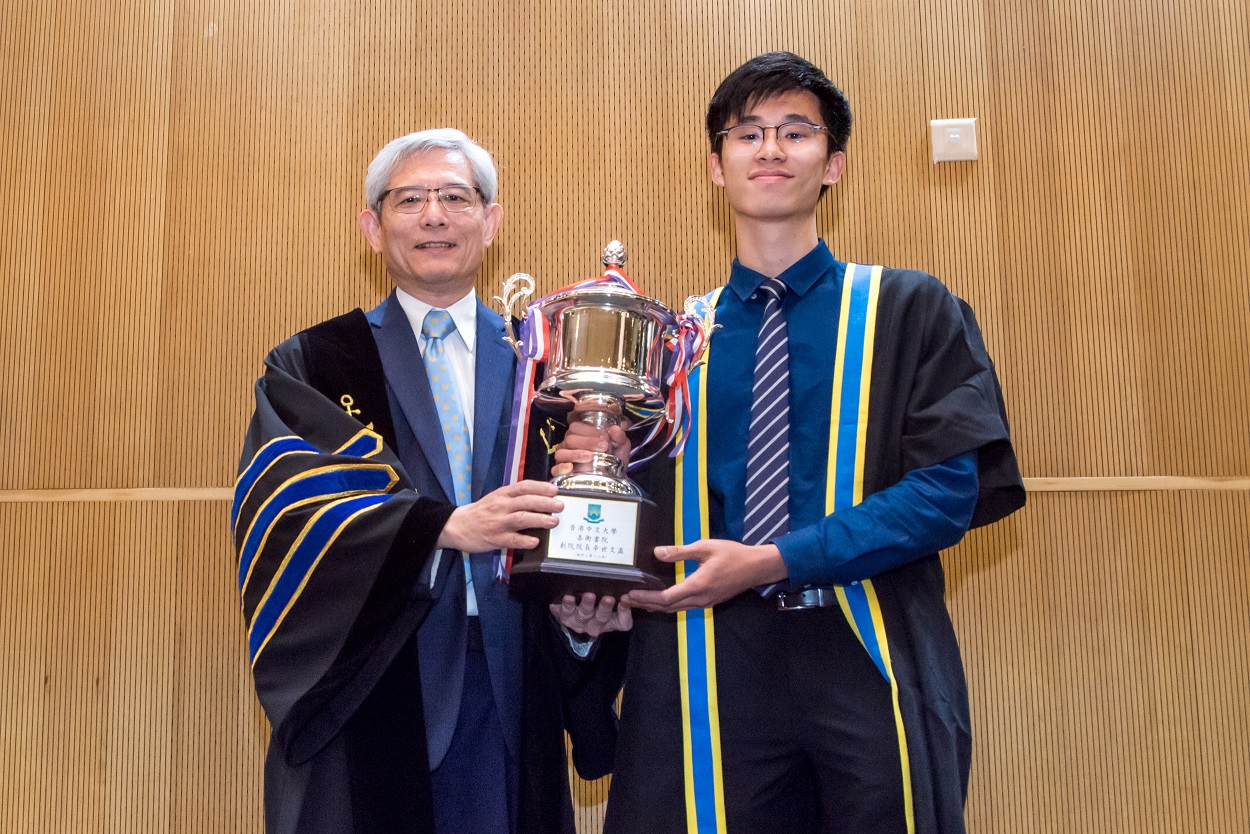 Other Posts in This Issue
College Students Awarded the Innovation and Technology Scholarship
New College Members
College Alumnus Mr. Peter Lam
The Secret to Happiness Is Helping Others
Archives
2021 2020 2019 2018 2017 2016 2015 2014 >
Sign up now to receive our newsletter