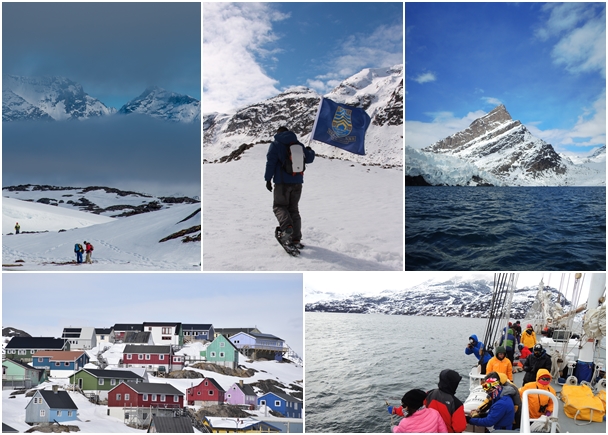 Zoey Cheung, a student of CUHK Chinese Language and Literature, remembered that the Arctic Expedition Team needed to conducted onshore researches twice every day. One day the weather deteriorated and they had to wait till 10 p.m. for their field trip onshore. As the temperature dropped below 0 °C, they got together like penguins to keep warm. Singing Cantonese pop songs aloud, they boosted the team’s morale and kept themselves awake until the completion of the Arctic field study. Another scenario was an ice shelf collapse of Sermitsaq Glacier when the exploration vessel sailed close to it. Zoey bore in mind the encounter in nature, ‘A glacier formed in a hundred thousand years could collapse in a blink of an eye.’

With Dr. Rebecca Lee, Honorary Fellow of the College, as the Consultant and Dr. KC Chung the Science Officer, students from S.H. Ho College embarked on an eight-day, seven-night journey on the exploration vessel Rembrandt Van Rijn in May this year. They were the first team of undergraduate Arctic explorers sent by CUHK. An overwhelming enrolment of the expedition well-proved that S.H. Ho students were unafraid of the bone-chilling weather in the Arctic. After a close examination of the research and publicity proposals in the 89 applications received by the selection panel, 16 undergraduate students from various faculties and 1 alumnus of the College were selected. They conducted 10 researches on topics including ecology, climate, geography and Inuit cultures on the west coast of Greenland. S.H. Ho College initiated this expedition programme to unleash the young explorers’ potentials and build their life experiences in such an extreme environment.

Dr. KC Chung, Lecturer of CUHK School of Life Sciences, is the Science Officer of the Arctic Expedition Team who led the members to investigate the rocky shore, tundra, ocean and fresh water in the Arctic. As part of mastering the use of scientific research appliances and conducting eight site visits and experiments in a short period, they shivered in the freezing cold, walking in the snow for six hours a day to and from the exploration sites. The exploration vessel was constrained by unstable factors like weather, water current and wind direction. The explorers could only provisionally determine the location of a site visit the next day based on their understanding of the situation after internal discussion of the investigation findings conducted the night before. Despite all the hardships, jet-lag, fatigue and technical difficulties the explorers encountered during the trip, they were able to persist through the chilling, unforgiving Arctic winds, snowstorms and blizzards. This was a test of physical toughness and will power. Dr. Chung quoted Sir Edmund Hillary’s ‘It is not the mountain we conquer but ourselves’, who was the first team of explorers reaching the summit of Mount Everest. He appreciated the young explorers’ courage to challenge their own limits in the difficult icy journey and published academic papers in such a short period of time.

Greenland, with 80% of its land surface covered by an ice-cap 4km thick in places, is the world’s largest island. The average temperature in Greenland is below 0 °C. Formerly a province of Denmark, it gained the status of an autonomous Danish dependent territory with partial self-government in 2008 referendum. Regina Tse is a legal student who interviewed the locals about their views on the issue of independence of Greenland. Given that Greenland is accepting €3.8 billion from Denmark unconditionally every year, most Greenlanders rely heavily on the governmental subsidy for living. Although Greenlanders show positive attitude to achieving full autonomy from Denmark, they have not come up with consensus on the pace and scale of independence. A number of interviewees expressed their willingness to compromise to the political reality in order to maintain their national income and living standard.

Dominic Mak and Jonathan Leung, medical students, did a comparative study on the physiological responses to acute cold among subjects from the Rembrandt Van Rijn’s Hong Kong travellers, the vessel’s crew in the Arctic and the local Inuit, who possess different physiological characteristics. Monica Tang observed humans’ physiological responses from the perspective of Chinese medicine. Despite the difference in observation and research methods between the two medical approaches, the students developed a more profound understanding on the way human bodies react to the nature.

As freshers to the Arctic expedition, all the team members found the exploration journey in such an extreme climate very challenging. The team consultant Dr. Rebecca Lee was pleased to witness how students overcame all kinds of challenges with perseverance. She believed that the sense of accomplishment built in the journey would boost confidence and help them tackle difficulties in life. Global warming received much attention on the international arena. Dr. Lee thought that only continuous field studies could help researchers generalize the trend of global warming. Ever since the polar exploration in 1999, Chinese polar researchers have been following the same route to the Arctic and collecting data on the same spots identified by the Global Positioning System. To monitor the climatic variations in different seasons in a systematic manner, they keep track of the sampling collection in the same route every year.

‘Innovation is a pillar for the betterment of society nowadays. S.H. Ho College has been nurturing its students to delve into the unknown and realize their innovative ideas. “A journey of a thousand miles begins with a single step.” The young Arctic explorers from various disciplines have begun their journey to broaden their horizons and to inspire the local communities with their reflections. I’m pleased to witness their growth as their Master,’ remarked Prof. Samuel Sun, Master of S.H. Ho College.

With an aim to visually expose CUHK members and the public of the snowy landscape in the Arctic, an exhibition displaying the appliances, equipment and findings used in the Arctic Expedition is held from 14 October to 30 November at the Exhibition Gallery of S.H. Ho College. The young Arctic explorers of the College presented on their expedition journey and research findings in the high table dinner on 14 October. They even published a book The Arctic Explorers from S.H. Ho College and produced a documentary which recorded their rugged journey and experiences. Please click here to view the online documentary. 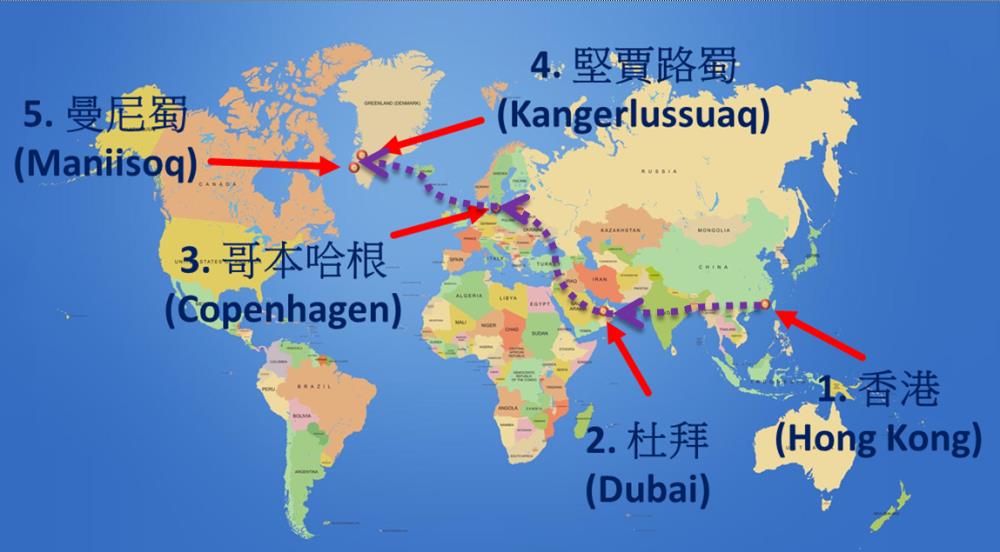 The flight path to Greenland 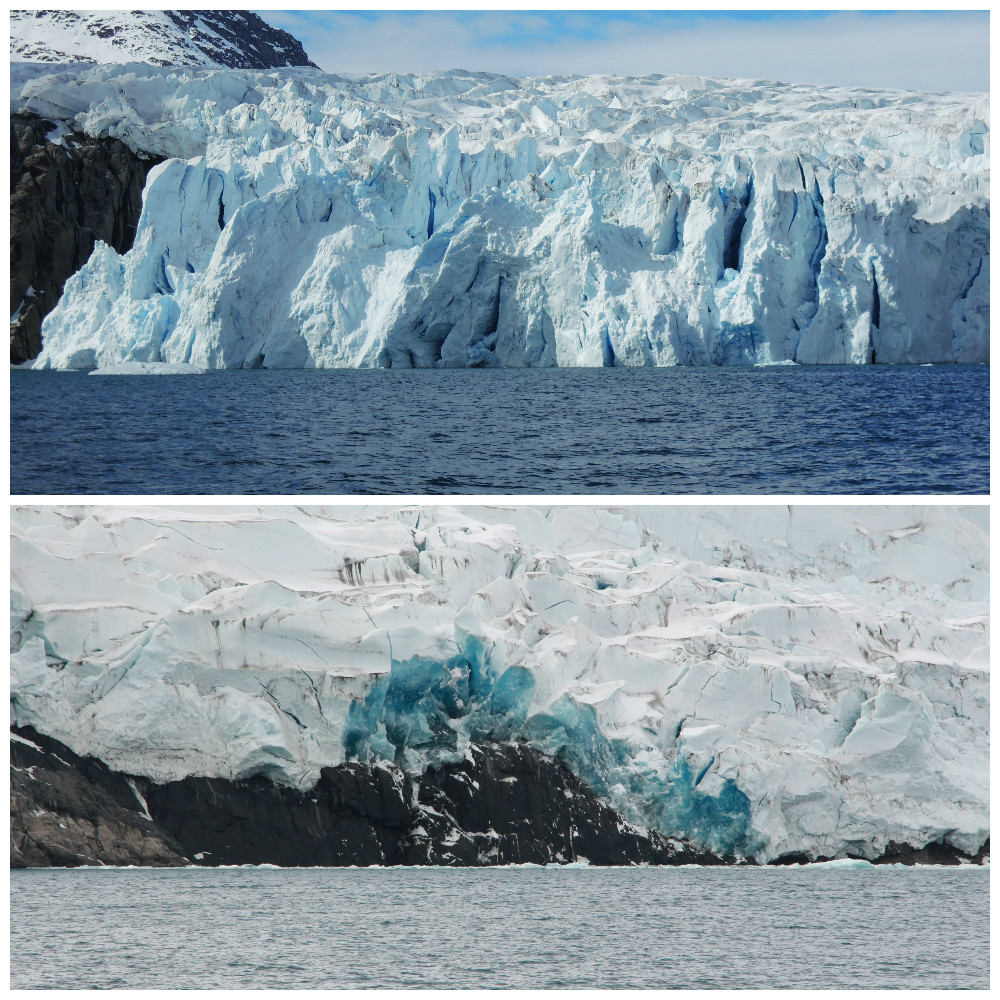 The ice shelf collapse of Sermitsaq Glacier (before and after) 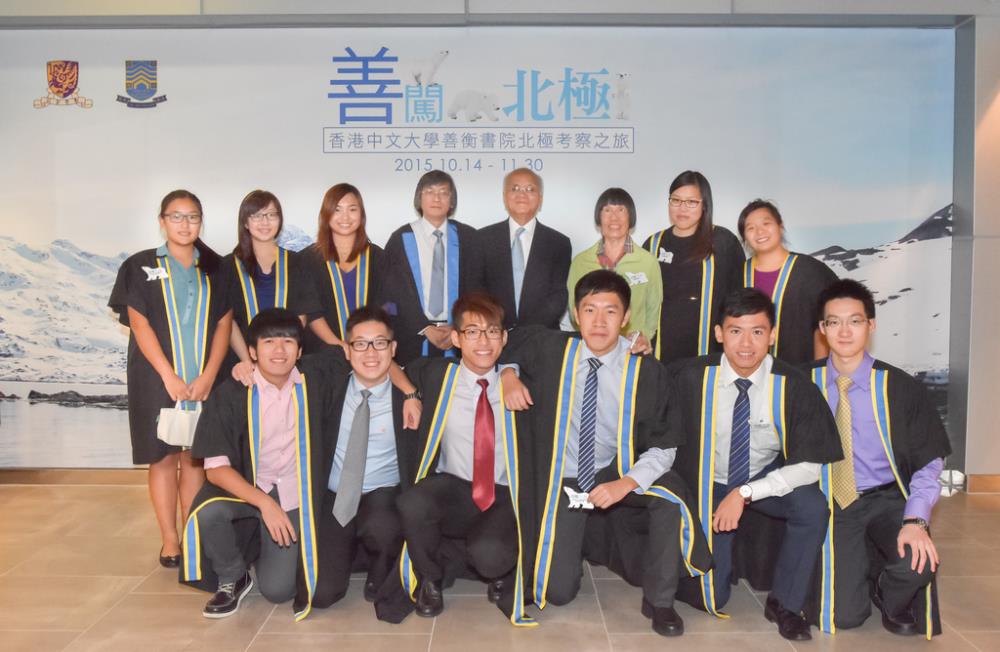 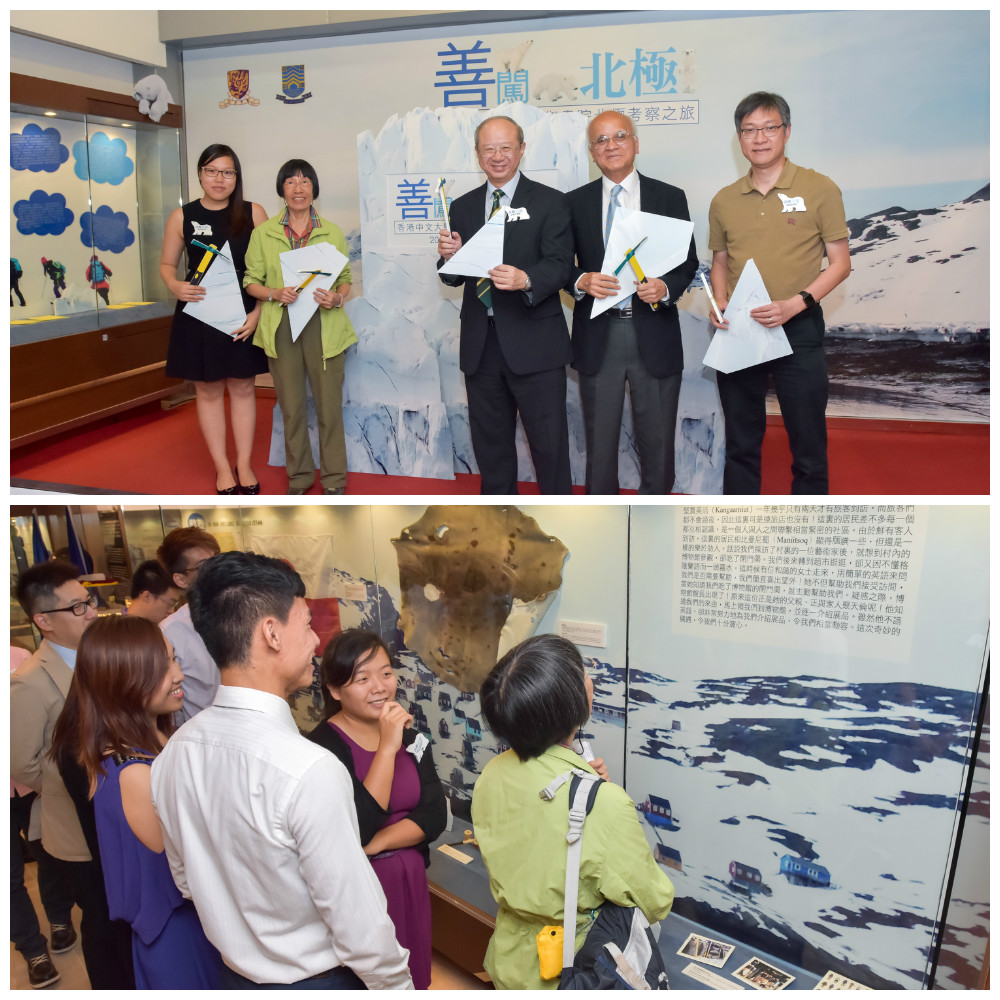 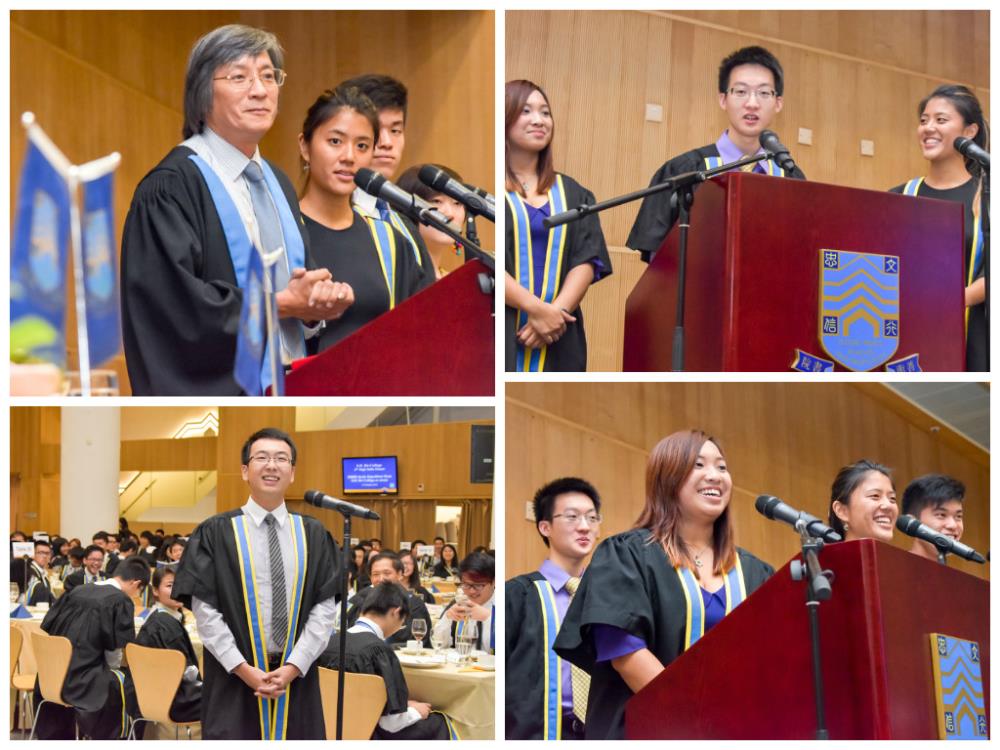