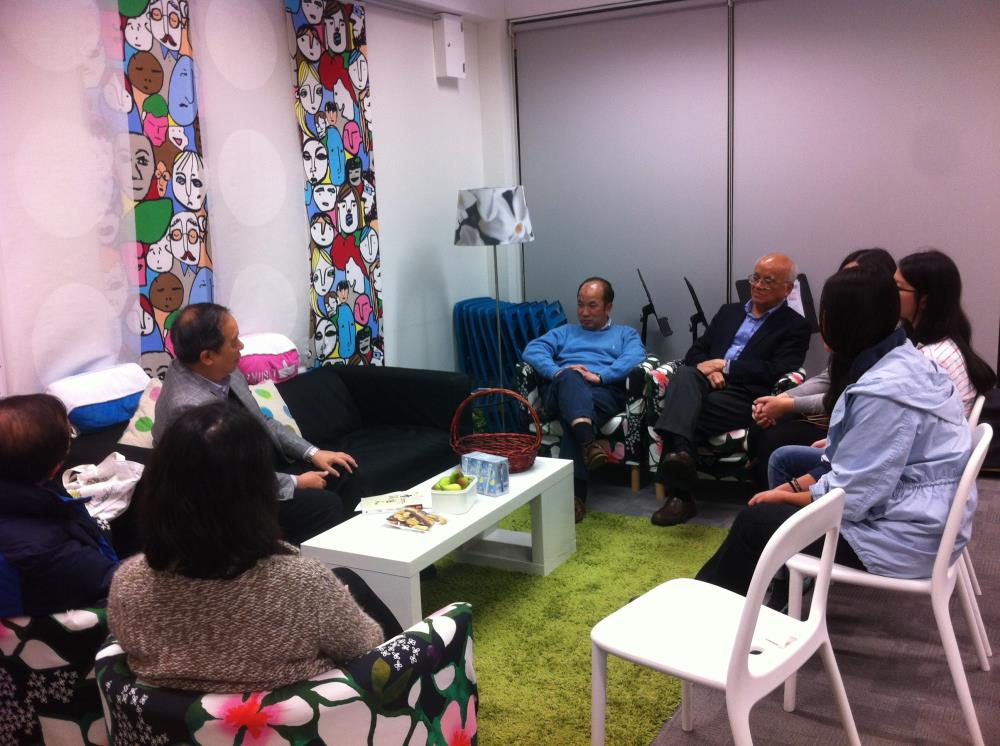 Finishing university studies in a tumultuous era and having worked in mass media for many years, Mr. Michael Ng would be the most pertinent one to share his wisdom with students facing an ever-changing world. On 5 March, Master Sun, Prof. Vincent Lee, two wardens and three students attended the night talk offered by Mr. Ng. He first highly approved of the Vice Chancellor’s advice that university students should explore the world more to broaden their horizon when they were still young. Nevertheless, Mr. Ng provided another alternative if they stayed in Hong Kong. He encouraged students to strive for knowledge and to enrich their life experience fervently so as to equip themselves in the face of political instability and uncertainties.

Mr. Ng recalled his days at university that he felt very happy in spite of extreme poverty because he could enjoy great freedom and witness a vibrant Hong Kong, which was about to thrive in the 1970s. He understood that today’s youngsters lacked opportunities for upward movement and faced ridiculously high land price. He used Su Shi (蘇軾) as an example to remind students to stay optimistic and not to lose hope; meanwhile, students had to prepare themselves to take on the challenge and to wait for the coming opportunity. He therefore emphasised the importance of polishing and developing one’s language and social skills at university. Last but not least, he pinpointed the importance of daily self-reflection: to grow from mistakes and to forget the hatred when someone wrongs you. Through self-reflection, one could always be a better person every day. Mr. Ng also highly recommended Daron Acemoglu and James Robinson’s Why Nations Fail, which ponders what the key elements are to make a nation sustain or fail. Lastly, the night talk concluded with Mr. Ng’s engaging chanting of Su Shi’s acclaimed poem “水調歌頭”. Even though the event was over, the talk still kept Master Sun, two wardens and students engaged in discussion of the night talk when they were heading to their rooms.

Nicole Mao, a Year 3 student from the School of Journalism and Communication expressed her gratitude for the College’s organisation of such a meaningful talk. Louie Cheng, another student of the same year and from the same School, expressed that she was not very interested at first but she would have regretted if she had not joined it. She found Mr. Ng’s words convincing and very inspiring and she greatly learned from his life wisdom and experience in mass media. She also enjoyed the discussion with wardens and tutors afterwards.