Embrace the Uncertainties with Ease 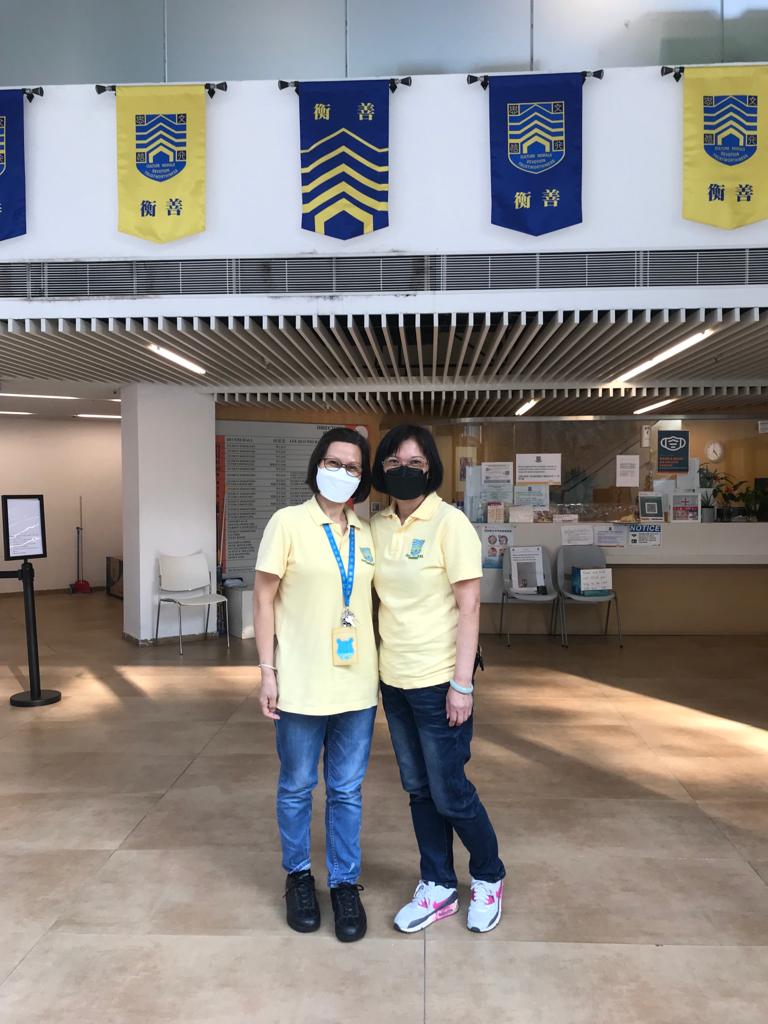 The interview is filled with the laughter of Ah Sau (left) and Ah Mui (right).

In these two years, workmen are on the frontline in the fight against the pandemic. Since the fifth wave of the COVID-19 outbreak, the cleaning and anti-virus prevention measures at hostels have been strengthened time and again to minimize the risk of resident students and staff getting infected. The measures include daily cleaning of public areas and facilities (for example, lift buttons, door handles, card readers), installation of sterilizer sprinklers inside hostel lifts, and regular spray of disinfectant on the rubbish bins.

Both Ah Sau and Ah Mui said they would measure body temperature and do rapid antigen test before reporting duty at work. If everything was normal, they would wear protective clothing, gloves, goggles and masks to start cleaning. When the confirmed cases increased, did they feel worried or tense at work? Ah Sau said, “For me, I was not that worried but I did feel nervous at work. In order to protect myself and other people, I needed to put on protective clothing which somehow created a big scene.” Ah Mui said, “When I received news that colleagues or students were infected, I would be a bit nervous but I tried to adjust my thinking. Our protection equipment was sufficient. The College purchased more hand sanitizers and other disinfection products for us. When there was any confirmed case at hostels, the College would also arrange sanitization by professional cleaners. All these gave me confidence about working at hostels.”

In late February, Ah Sau’s husband was tested positive and Ah Sau stayed home for isolation as a close contact. She said, “At first, only a single line was shown on my rapid antigen test cartridge. When it came to the 4th and 5th days, there were double lines. After three or four days, I got a single line again. I think I was infected quickly and recovered quickly too.” Ah Sau is grateful that she did not feel ill during the time.

Ah Mui was also a close contact for a time. Her elder son was tested positive in late February. Although her elder son did not live under the same roof, he did return home and had meal with the family. As a result, Ah Mui needed to stay home for isolation. Eventually, she and other family members were tested negative. In early March, Ah Mui faced another challenge. The other two workmen from Ho Tim Hall were tested positive and Ah Mui was under a big pressure. “We changed our clothes together in the same room in the morning and in the evening too. The day I knew they were tested positive, I told my family that I would wear a mask at home and would not have meals with them. I was afraid to get them infected.” Fortunately, Ah Mui’s test results remained negative.

Ah Sau said, “I talked to friends who were also tested positive. After sharing our own thoughts, we would be more relieved. We learn to embrace the uncertainties with ease.” To relax, she also watches TV dramas and goes out from time to time. As a resident in Ma On Sha, she loves to go for a walk in the promenade and ride bicycles. As for hiker Ah Mui, she turns her eyes to nature. Living in Sha Tin, her backyard is Lion Rock. “I will go to the less crowded trails. I have been to all the trails in Lion Rock!”

The workmen shared that when the pandemic is over, they hope to have dim sum and go hiking with friends and relatives. What sounded so common in the past has now become their priorities on the wish list.