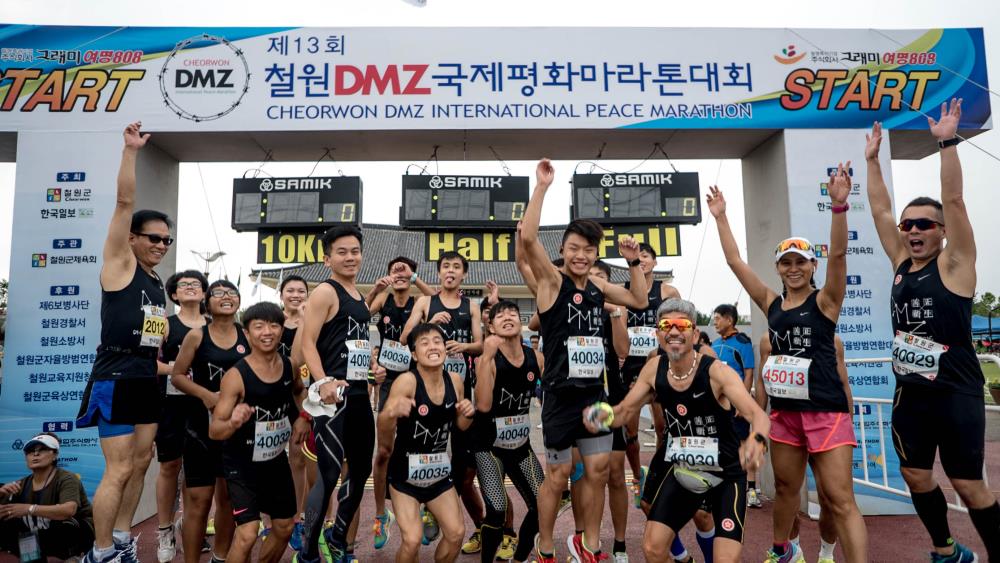 Taking photo at the starting line

S.H. Ho College incepted SHHO Runner Force in 2012 to cultivate students’ discipline and promote healthy living. In November 2015, SHHO Runner Force first teamed up with Christian Zheng Sheng College (Zheng Sheng) to complete the 42 km full marathon in Athens. The fastest team member crossed the finishing line in merely four hours. This year the SHHO and Zheng Sheng joint running team kept up with their good work and participated in the Cheorwon DMZ International Peace Marathon on 4 September. They received special full-marathon training from April to August before departing for South Korea to challenge their physical limit and will power in the race, reaching a new horizon in their lives by running. Encouraging and supporting one another all along the marathon route, the good companions’ camaraderie manifested the messages of love and peace as promoted by the DMZ Marathon. Finally all the team members completed the full marathon of nearly 42.2 km within the required limit of five hours.

DMZ (or Demilitarized Zone) Marathon is the largest warzone marathon in the world. It is held in Goseokjeong, Gangwon-do in South Korea, near the border between North and South Korea. The district has been designated a demilitarized zone or military restricted area, and is highly defended.

That SHHO and Zheng Sheng students teamed up to join marathon races together was a big challenge to their physical fitness and stamina. The joint team also carries another important meaning. With different family backgrounds and life experiences, the two groups of students got to know one another through running and undergoing arduous training together. Heading for the same destination, they encouraged one another when they felt dispirited, and supported one another when they were injured. The philosophy of ‘influencing others’ lives with one’s own life’ is thus cultivated.

SHHO student Miss Judy Chen joined the College’s Runner Force in 2012. Owing to certain reasons, she had nourished the thought of giving up running, but finally set her mind on more intensive practice and participated in the Athens Full Marathon 2015, ‘I especially appreciate their view of their past, which they never conceal. They are quite willing to share with us their old unhappy experiences. And they are often curious to know the stories of our growth and university life. This kind of interaction makes me realize deeply that running not only helps us grow, but also allows us to share our pleasure and other feelings with our teammates.’ She said.

Mr Elvis Lam, also an SHHO student, unfortunately hurt his iliotibial tract in early April. He stopped running for a few weeks and resumed his practice in mid-June. He was thankful to his teammates, who encouraged him to endure the harsh training each time. Their benign competition also motivated him to exceed his own limit, so that he could finally finish the DMZ Marathon of 42.195 km within the required range of time.

During their five-day trip in South Korea, the runners enjoyed themselves by experiencing the local culture. They tried making kimchi and wearing the traditional Korean dress Hanbok, and tasted ginseng chicken and Korean-style roast chicken. Besides they visited famous tourist spots like the Gyeongbokgung Palace, the Hanok villages, the shopping district Myeong-dong, the Seoul Tower, and the Imjingak Resort and the peace exhibition hall in DMZ, leaving their youthful footprints in places other than the marathon route.

To view the memorable moments experienced by the SHHO and Zheng Sheng joint running team in Athens and DMZ Marathons, and the memories of their rigorous training, please visit the joint team’s Facebook Fanpage:
https://www.facebook.com/shhoxzsmarathonteam/posts/678548342304121 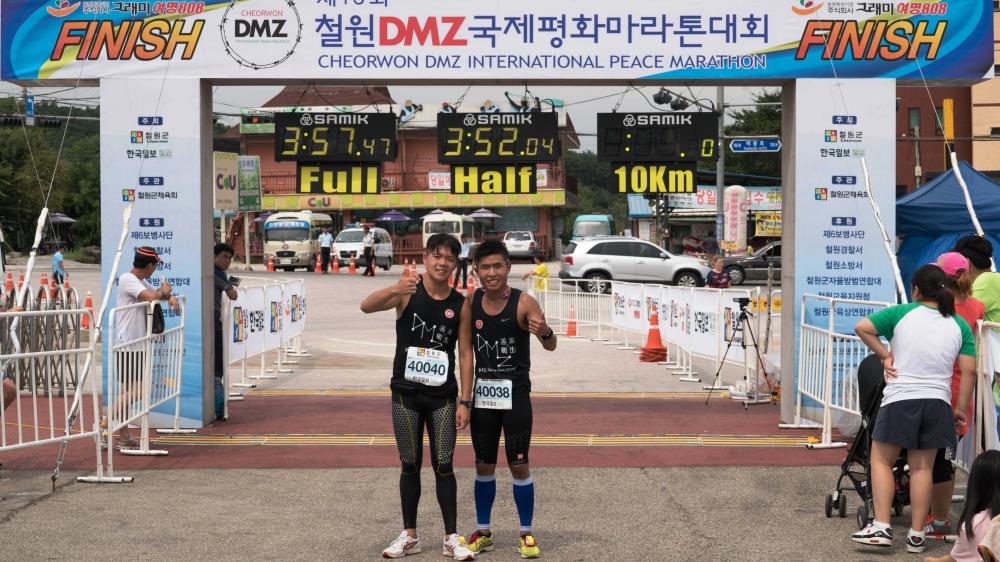 Heading for the same destination, SHHO and Zheng Sheng student teamed up to support one another when they were injured. 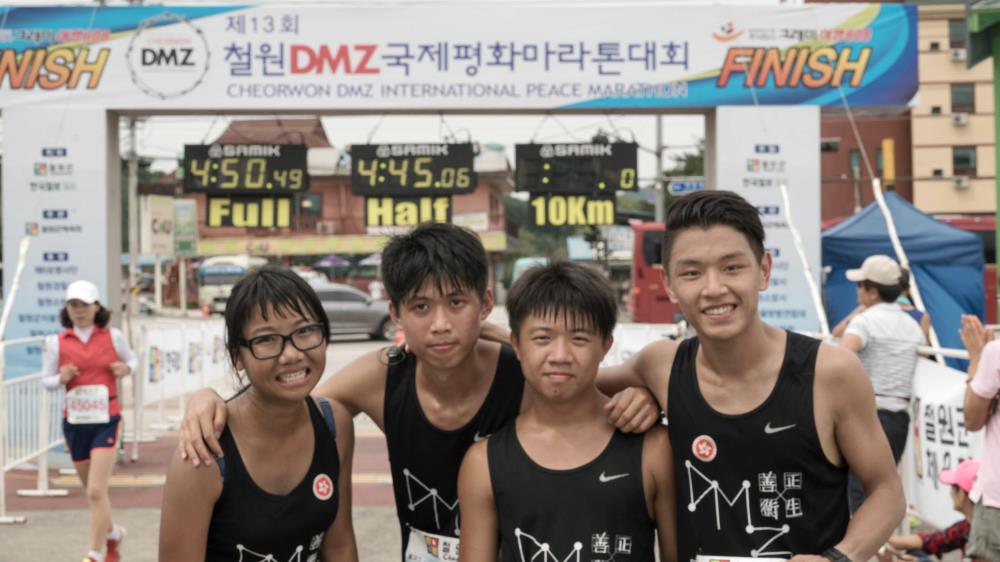 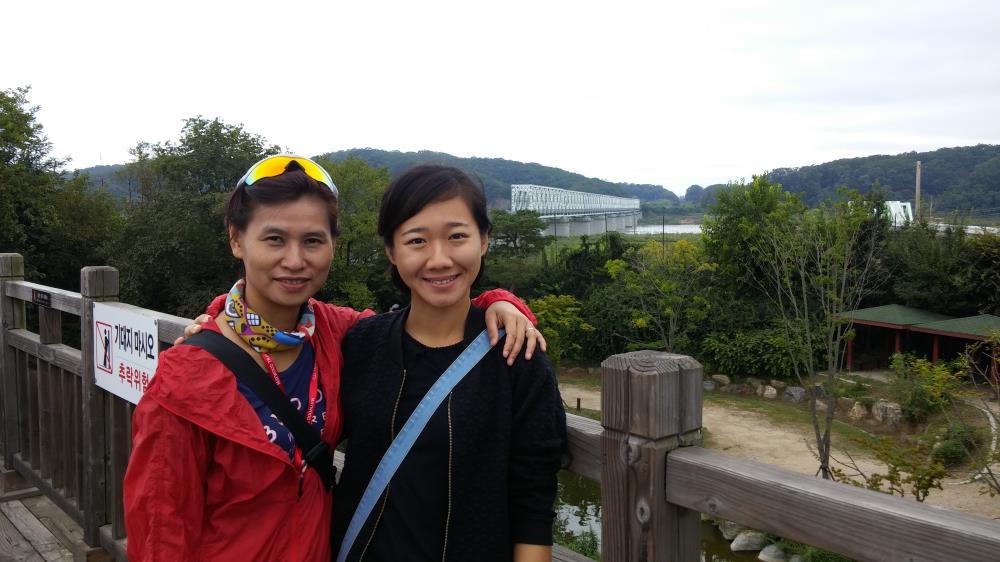