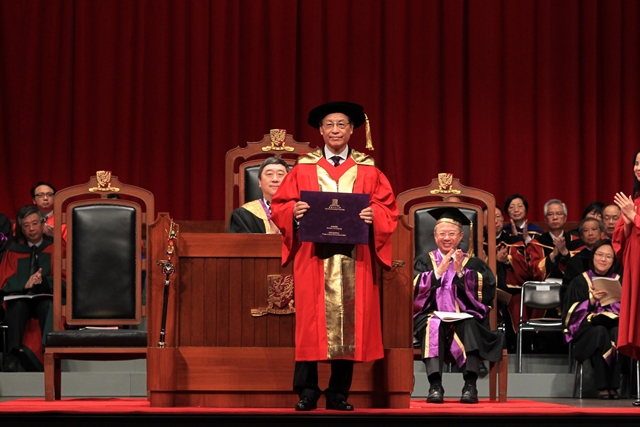 Honorary Fellow of S.H. Ho College Prof. Liu Mingkang, known as ‘Father of China Banking Regulatory System’, was conferred an honorary doctorate degree in December last year for his distinguished accomplishment in the financial sector. Prof. Liu is a renowned financial expert and former Chairman of the China Banking Regulatory Commission. He is currently Honorary Dean of the Lingnan College at Sun Yat-sen University, Senior Fellow of the Hong Kong Institute of Bankers, BCT Distinguished Research Fellow of the Institute of Global Economics and Finance, and Honorary Professor of the Faculty of Business Administration at CUHK. The 79th Congregation for the Conferment of Degrees was held on 3 December 2015, presided by Prof. Joseph Sung. Five distinguished persons were conferred honorary degrees in recognition of their outstanding contributions to their respective areas of achievement to educational, academic and cultural progress and the promotion of community welfare.

Prof. Liu is an expert on the Chinese banking system, and was appointed to key positions in many banks and government departments. In 2003, Prof. Liu was appointed as the first chairman of the China Banking Regulatory Commission, to regulate China’s troubled banking industry. Pushing forward a comprehensive reform of the state-owned banking sector, he managed to improve the provision coverage ratio, strike a balance between innovation and regulation, significantly reduce the proportion of non-performing loans, and build a stronger regulatory system. He was honoured with a Risk Manager of the Year award by the Global Association of Risk Professionals, and a Lifetime Achievement Award by The Asian Banker magazine. The University conferred upon Prof. Liu the degree of Doctor of Social Science, honoris causa, in recognition of his significant contributions to the banking industry.

On 11 January 2016, Prof. Liu Mingkang presented on ‘Chinese Economic Challenges and Opportunities – How to Include the “One Belt, One Road” Strategy’ in CUHK Distinguished Lecture. Prof. Liu presented various perspectives on the ‘One Belt, One Road’ strategic initiative, as well as the policy opportunities available to China in the immediate future. ‘The Silk Road Economic Belt’ and ‘The 21st Century Maritime Silk Road’ are the major components under the ‘Belt and Road Initiative’. Under the principle of mutual consultation, mutual construction and mutual benefit, the plan hoped to help promote economic prosperity, regional cooperation and mutual learning among the peoples. Prof. Liu remarked that China did not aim at consuming excessive productivity with the Belt and Road Initiative, but to achieve a win-win cooperation and partnership between China and the countries that are located along the ancient Silk Road. ‘Be clean, green and transparent’ are the principles of execution, among which ‘transparency’ is the most important. During the economic reform in the mainland, Prof. Liu found it necessary to evaluate the effectiveness of the relevant government departments. 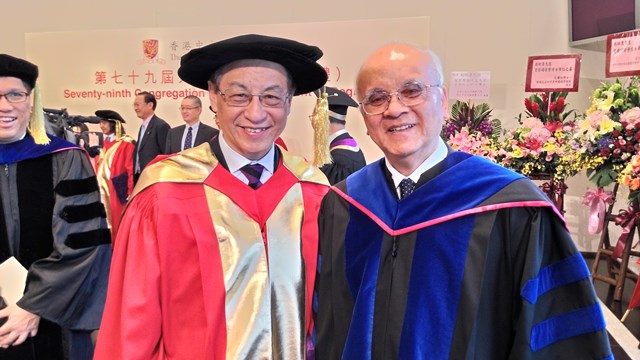 CUHK 79th Congregation for the Conferment of Degrees 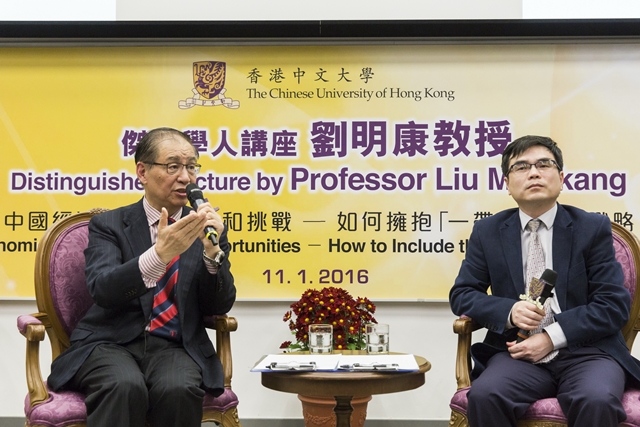 Prof. Liu Mingkang presented on 'Chinese Economic Challenges and Opportunities - How to Include the "One Belt, One Road” Strategy' in CUHK Distinguished Lecture by Professor. (Source: CUHK CPR Office)