The College draws its motto from the Analects of Confucius, which have had such a profound influence on Asian and world thought. In them we read:

The Master [Confucius] instructs under four heads: culture, moral conduct, doing one’s best and being trustworthy in what one says.” (Analects VII,25)

Tsang Tzu said, “Every day I examine myself on three counts. In what I have undertaken on another’s behalf, have I failed to do my best? In my dealings with my friends have I failed to be trustworthy in what I say? Have I failed to practise repeatedly what has been passed on to me?” ’

The five golden lines on a blue ground that dominate the College’s emblem derive from the Chinese character ‘jia’ [家] meaning ‘home’. Their gable-like shape and open appearance speaks of the College as a sheltered yet freely accessible place where teachers and students can together live, learn and grow. At the same time their convergence towards the centre subtly reflects the character [人] which means ‘ren’ (‘people’), and can thus be seen as symbolic of cultural exchange among all peoples. The gradation in thickness of the lines suggests variety and progress. Finally the blue of the ground represents globalization and a wide ranging spirit, while the gold of the lines, the Chinese characters and the English words represents the College’s desire to achieve the highest possible goals.

The College is a home away from home for its members. Through full residence and whole person education programmes, students will advance in the four virtues of the College motto—culture, morals, devotion and trustworthiness. 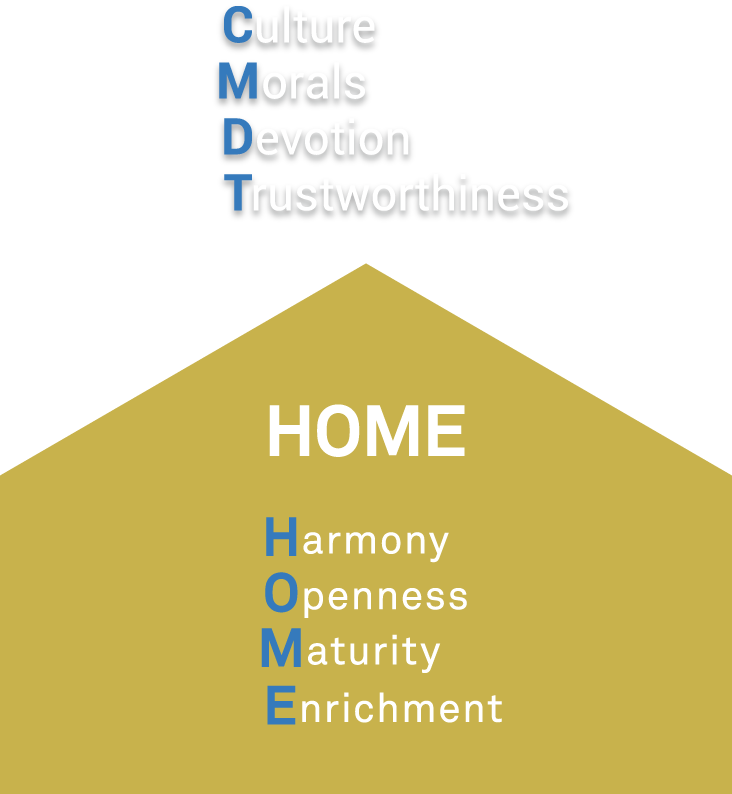